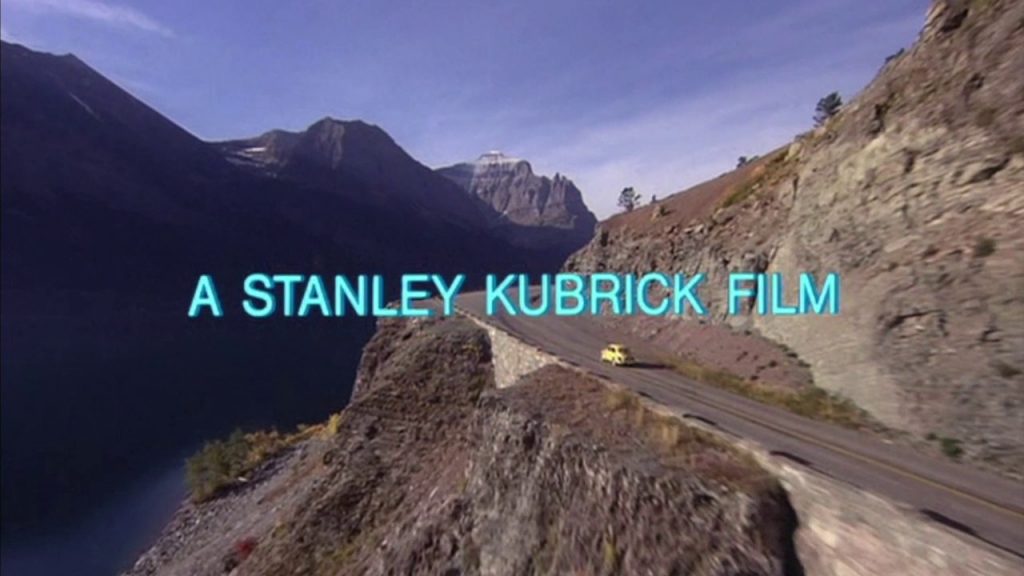 The Shining: A Filmic Amalgam of „Postmemory”[1]

The logo of Warner Bros. Pictures, with it’s cloudy background, is merciless replaced by a breath-taking landscape: what seems like an endless eye of water, mirror for the reflecting, relatively clear, passively waiting sky, stone mountains, suggesting a canyon, all accompanied by a deep, threatening music. So presents itself the opening scene of Stanley Kubrick’s production The Shining[2], one of the most debated, analysed and metaphorical decomposed cinematographic production, which can hardly be categorized as a follower of a precise genre and which, due to the enormous number of interpretations, is possibly telling more, or, on the contrary, less, than the director initially intended to transmit. On the other side, this could have precisely been Kubrick’s main purpose with The Shining…

The masterfully spatial and temporal construction of the movie cannot be disputed and Kubrick’s well-known attention to details and symmetry clearly indicates the weight of symbols and hidden meaning carried by the architecture. Therefore, the following essay proposes a bond between Cristina Nord’s written work Wege, die nicht aus dem Wald hinausführen and the filmic masterpieces, more precisely, an empirical search for ghostly traces of time in the opening „tracing” scene of the movie.

Non-diegetic, yet with an intense impact, Wendy Carlos and Rachel Elkind’s song „Rock Mountains“ reflects the impunity, majesty of the presented scenery, as beautiful as it is dangerous and frozen, better to be left untouched and undisturbed by human hands. With a surely not unintended centralization on a singular, lonely island, the thematic of isolation and its impact on the physical and psychical nature of beings is already being made into a theme. The audio not only offers attributes to the visual, describing it and constructing it with every bass and pitch; it creates the initiative atmosphere of the whole filmic production, willingly and unknowingly influencing the viewers, opening the fictional world to them and, simultaneously making them forget about the diffuse barrier between reality and fantasy. Moreover, either if noticed after the end of the movie, or, more rarely, during it, one can make incipient predictions of the tone and development of the story- in the first case scenario, it can be too late, one is already trapped and tricked, but more entertained, the suspense not being demystified.

A monument surrounding, sustained and modelled by centuries of structuring, ages of history accumulated and then the unstable, constantly shifting camera binds the past with the present, leading to the future, by noticing the presence of an apparent meaningless automobile on the serpent-shaped street, in a see of pines. Watching from the sky, trembling, as if moved by vital breathing, the bird perspective of the invisible camera marks the first Point-Of-View-Shot of the movie and directly involves the audience in its diegetic world. But what if its main purpose is not the identification with the public eye? What if the camera eye metaphorical stands for something more strongly rooted, more ancient- questions aroused as a following of the spatiality opted for. Is the director imposing his own omnipotent power and influence on the fate of the tiny car, even on the dominant landscape, not letting one forget about his authority? Is he comparing himself to a divine presence, or, moreover, reminding of the ghost of the past, forever present? The feeling of being followed by is irrefutable awaken, amplified by the actual tracing the steps of the moving car. And then the first unexpected happens: the automobile is being left behind, the camera moving faster (00:01:25). Brisk moment of irritation (it finds the human presence shortly after, 00:01:38), but the confusion is already stabilized and the cinematographic conventions shuttered. Maybe the main meaning of the dizzy movement of the camera was not even the tracking and following, but its natural course towards future. Therefore, it is not absurd to read it’s outwardly knowledge and capacity to see more than meets the eye, ability also reflected in the character of young Danny Torrance (starring Danny Lloyd). His constant dreams and interpellations with events not yet occurred do not lower the suspense, nor the impact; on the contrary, the disturbances and narrative shifting play with the naïve audience, which has been left with the impression of an own omnipotence and knowledge. And this happens not through jump-scares: one can notice a predominant lack of them and question the association of The Shining with the horror genre, but through a from beginning settled and always growing atmosphere, as a construct of the game with spatiality and temporality. Is maybe the flying POV one of Danny’s dreams, occurring while he passes through mountains, in the car driven by his father Jack Torrance (Jack Nicholson), with the mother Wendy (Shelley Duvall) on the right seat? Finally, the car is absorbed by the tunnel, implicit driving into an unknown, dark territory, full of presences, which wait awakening and remembering. Once the destination has been reached- the Overlook Hotel- its impunity and even its nuance mirrors the one of the mountain peak and the automobile becomes one the many parked, not singularized and insignificant.

Similar to Sergej Eisenstein’s intent of constructing cinematographic productions unified by collective, real moral, social and mainly political issues, with the purpose of producing changes in the society and motivating masses to awareness and, moreover, to revolution, Cristina Nord discusses the undeniable ability of films to produce changes and keep the shadows of the past alive by construction and reconstruction. The Shining as a whole addresses the disturbed relationship between past events and future ones, spatial universes which influence each other through repetitions and absurd chronologies, with such a strength, that the dispersion cannot be done. Citing Nord, the re-enactment of the past must not be done directly[3], but subversively, therefore encouraging engagement and mental associations. Although the beginning scene of the movie does not, on the surface, engage the mentioned theme, and the ending, presenting a Jack Torrance photographically caught between the two dimensions, unknowing where he belongs to or when will his fate come to a rest, immortalizes more obvious the uncanny effect of ghosts captured in time and space, the opening sequence established already the dormant territory and is vital for a further analysis.

The continuity of the camera movement, it’s relative ignorance of the car, proving a higher purpose and wisdom, earned only by experience. The acting of objects and subjects do not appear as new to it, but as endless repetitive; do maybe only accidently catch it’s view, like a prey not worth sacrificing for.

Although some theories regarding the hidden problematic suggested in the movie seem to be more of conspiracies, Kubrick uses each shot for sharing and informing the open, free of prejudice audience, often about real events, therefore his reticence towards cutting. His whole intention can only be supposed, but in his discrete manner of addressing the symbolistic of his movies, he enables a freedom of thought and interpretation, which make his films so debated.

Overlook Hotel plays the most significant role in both the development of the narrative and in the construction of meaning; it’s objectivity as a material building being replaced by a subjectivity and individuality as strong as the one of the complex Jack Torrance.  With a labyrinthic, always shifting construction, the rules of spatiality and temporality are irreversibly diminished and a new, inner logic arises. Alternating between claustrophobia and illusion of endless pathways, Norbert Stressau praises the use of by Garret Brown invented steady camera, technique, which strongly reminds of Travelling Movies and its impact on a „dynamisation of room“[4]. In a similar way, Michael Gröper discusses how this functions in producing a „distortion of the human horizont“[5].

Walls filled with pictures of previously owners and guests of the hotel, increase the contrast between two classes: the workers, like Jack and his family, who must isolate themselves and sacrifice the previous order, with the purpose of satisfying the needs of the ones present, or by long gone, who represent the Bourgeoisie. In contrast to the opening scene, where, as Nord considers, showing less contributes more to curiosity and to the need of find the footprints by themselves, as audience, the Hotel with it’s ballroom as portal practical materializes ghosts of the past, who leave the walls and step briefly but noticeable on the ground. Despite this, the entrance into the world of fiction is not absolute, for the uncertainty if it is a concrete resurrection or just a manifestation of Jack’s psychosis. The documentary movie Room 237[6] depicts in details every icon, index and symbol present in the movie, correlating the evil atmosphere and the misfortune to the build of the Hotel on an old Indian graveyard, arousing the question of genocide and judging the American history; this theory being still highly disputed and a source of speculation.

To bring this idea to an end, Cristina Nord, when mentioning the importance of tracing the steps of the past, in order to model the present and the future, just as Sigmund Freud, the figure mostly used, despite his reticence towards cinematography, in (psycho)analysing Kubrick’s production, practiced hypnosis for bringing to surface the „trauma“ of childhood, forever reflected in adulthood, praises cinematography for binding time and space with the metaphysical. The genius director was fully aware of this capacity and incomparably collected themes, which require involvement and awareness of viewer in his masterpieces, as it could have been noticed from the beginning to the ending scene of The Shining.